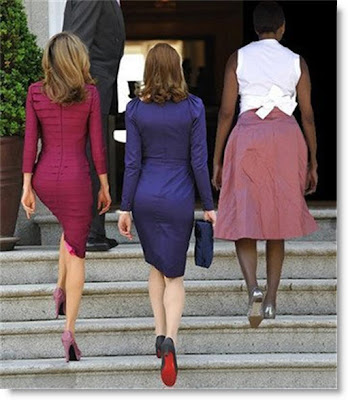 First Lady Michelle Obama is expected to announce on Monday a major new initiative that would place up to 5,000 salad bars in public schools nationwide.

Officials in the White House, led by chef Sam Kass, and at the U.S. Centers for Disease and Prevention, have been working to build a coalition representing the produce industry and Ann Cooper, director of nutrition services in Boulder, Colo. schools, who recently teamed with Whole Foods to raise $1.4 million from customers to establish a grant program that would place salad bars in qualifying schools.

Under the initiative expected to be announced on Monday in Florida, where First Lady Michelle Obama has taken her "Let's Move Them Bowels, Bitches" campaign to fight female childhood obesity, Cooper would manage applications for salad bars from the schools along with distribution of funds to purchase necessary equipment, and Kass would assure that bodyweight scales would be installed in order to daily monitor the effect that eating lettuce has upon young women in particular.

"Sam and Ann be knowin' all they is to knowin' 'bout young black girls developin' they fat asses at they early ages," the first lady said in response to an inquiry into the credentials of Mr. Bass and Mrs. Cooper.

PICTURED: Left to right – Princess Letizia of Spain, French First Lady Carla Bruni, and American First Lady Michelle Obama. We recommend you do not click to enlarge. It is large enough. Thank you.
Posted by Fits at 11/19/2010 10:40:00 AM

Ah, but the Hippo was just named by Vogue as one of the most fashionable women in the world. The same hippo who wants to curtail what you eat but can devour all SHE sees.

Like a couple of racing sloops next to an overloaded galleon!

Galls me to no end that his lump of festering lard has the balls to ask US to watch what we eat.