The Teleprompter was out of commission, so the President was forced to ad lib a reason for ending the press conference early. And as you know, whenever you see the words “Obama” and “ad lib” in the same sentence, you’re in for some fun.
Let’s turn it over to India’s NDTV for the ensuing hilarity: 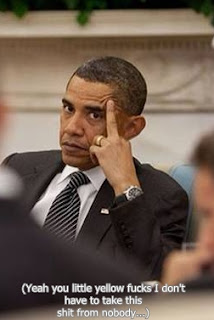 By the time 45 minutes had passed, Mr. Obama seemed eager to end the news conference and get on to his next stop: Yokohama, Japan, where he is to attend yet another conference, the Asia Pacific Economic Cooperation forum. As a president with his own plane, Air Force One, Mr. Obama controls his own schedule. But he cut short his final questioner.
“I’m late for my flight,” the president explained.

“I’m late for my flight.” That’s the best he could come up with? The most powerful man in the world, the man who has the world’s most famous airplane at his beck and call, is afraid he’ll be late for his flight?"
Had absolutely nothing to do with being late for any flight, as insiders are leaking the story that Michelle..."Not proud of no America, not me no-how no-way, sucka!"...Obama was having problems checking her dozens of tried and true Delhi Dildo's through customs, and had to swap them for Seoul Stingers in order to appease South Korean security.
Posted by Fits at 11/18/2010 06:49:00 PM

How dare you disgrace Porky by hooking him with the legend in his own mind.