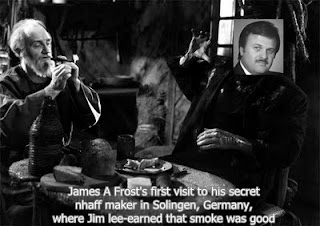 Focusing upon not only the scam-fest for Jim Frost's birthday bash...an unseen knife for $22 PLUS shipping charges that'd make a Brooklyn bookie weep, but the DEER HEAD DEUL..
Now what, you ask, is a DEER HEAD DEUL? A DEER HEAD DEUL is nothing less than a testament to the Tennessee education system that can't even teach young'uns to spell the word DUEL.
Sorry but they're ringing those phones in the background again so I'm changing channels.
__________________________________________
Back for an observation; I've never seen Todd Boone beg so much. Must mean the Jim Frost Birthday Present Extravaganza isn't selling.

Works something like this; whenever they get to a particular product that is too low in quantity to focus on, Boone pushes his producer to move on. Last thing they want, last thing they NEED, is for potential customers calling and wasting the overworked operator's time by asking for knives that are no longer available.

Whenever they OVER-focus on a product, bet your bottom dollar it isn't selling for squat. Common sense. No need to plead for folks to buy something that is selling itself. This could be a good sign. Means people are cluing in on the scam. Let the bastards beg for their supper. Let them sell their shoddy pieces of crap to someone else; someone who doesn't care if a seriously dangerous tool made as cheaply as possible does what it was designed to do...fall apart...and in the process takes off a finger or slices an artery just so James A. Frost can rake in the big bucks.Let someone else buy the Frost garbage, the sort of someone else who doesn't mind that Frost features children's knives that are bee-ilt (built) as shoddily as their grownup counterparts. Nothing worse than a man who'd endanger the well being of a loved one, so let them play the Frost game and slowly but surely erase such ignorant and unworthy genes from the pool.
Posted by Fits at 11/14/2010 02:16:00 AM