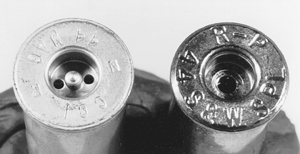 "Match locks, equipped with a slow-smoldering fuse made of chemically treated rope called a “match,” would burn out in damp weather and could be blown out by wind. Wind and damp were the enemies of flintlocks that could blow the priming charge out of the funnel-shaped pan or saturate it with moisture to the point where it would not catch fire. Rust and powder fouling in the tiny tube that connected the charge in the pan to the propelling charge in the barrel often prevented a successful firing with only the priming charge burning. The expression "a flash in the pan" is still used to describe a person or enterprise that shows promise, but fails to get past a good beginning. Under the best of circumstances, the flintlock system gave only reasonable reliability. A small piece of cut flint held in the jaws of the hammer struck a steel cover on the pan called a frizzen, knocking it open and scraping the inner side to throw sparks into the powder charge in the pan.  In terms of speed it was slow. Anyone who has seen a flintlock fired is familiar with the puff-boom! sound of the report as the priming charge burns with a one-beat pause before the propelling charge fires. History is filled with untold numbers of targets, animal and human, who have ducked to safety during that beat, which was sometimes two beats if the day was damp and the tube to the barrel a bit clogged.
The breakthrough to improved ignition was made by a Scottish Presbyterian minister, hunter, shooter and gun buff -- Reverend Alexander Forsythe -- who was the first to come up with the idea of using these detonating explosives to ignite propelling charges in firearms. He received a patent in 1807 for a system that did away with the priming pan on the flintlock and filled the tube leading to the barrel with a percussion explosive made of sulphur (sic), potassium chlorate and charcoal..
Click here, or the headline link, to learn more about the history of primers.
Posted by Fits at 11/08/2010 11:59:00 AM

Wonder if Google is going to do a logo tribute in his honor. Not holding my breath.

Nah. All he did was to forever change the entire world.