The Bureau of Land Management (BLM), usually a quiet and somewhat backwater federal agency, has now taken its position as a placeholder for an Obama administration desperate to keep appearances up that the southwest border is secure. In a small but politically divisive move, the BLM last night did an operation in the Casa Grande area of the Sonora National Monument about a mile south of the major east-west corridor Interstate 8. The operation? Not to conduct law enforcement operations, but to replace signage that went from a public warning of illegal alien smuggling and drug trafficking and illegal use of weapons and transportation, to this: 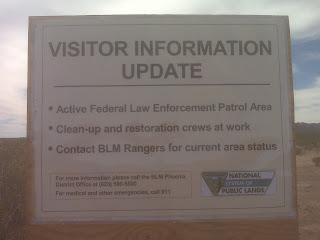 The prior signage was criticized for being a "welcome mat" to illegal aliens and drug cartels by former Assistant Secretary for Immigration and Customs Enforcement, Julie Myers Wood. Arizona Gov. Jan Brewer even used the signs in a campaign ad that now appears on YouTube, calling them "an outrage" and curtly telling President Obama to "Do your job. Secure our borders."
Rape, murder, drug trafficking, and even the non-violent ones ship $25 billion dollars a year back to the old hacienda.  Not like any of this is news to the Obama's or Pelosi's or Reid's, just business as usual in their drive to build an ever larger constituency over the dead bodies of their fellow Americans.
Posted by Fits at 11/01/2010 09:22:00 PM