Cop Gutshot By Female Partner
A Triborough Bridge and Tunnel Authority officer was placing her service weapon in a gun locker at the Robert Moses Administration Building when she hit the trigger, the sources said.

The bullet ricocheted inside the locker before it screamed toward another officer standing in the room, sources said.
The slug pierced him in the gut, but the wound was not life-threatening.
"He was alert and talking to people after it happened," a source said.
The unidentified officer was taken to Harlem Hospital, where he was listed in stable condition.
It was not immediately clear if any disciplinary action had been taken against the officer, but authorities were treating the incident as an accident. 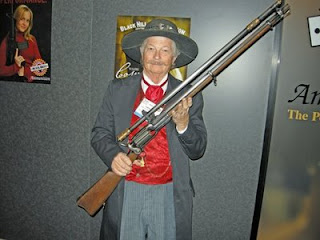 Yes kids, there is NO such thing as NEGLIGENCE in the NYPD's vernacular, at least not when speaking about their own semi-retarded members.

First there was the NY-1 GLOCK trigger, then the NY-2 GLOCK trigger, and to be honest they're going to soon be compelled to create yet another crappy, ridiculously heavy, bang switch for NY's finest before they all kill one another.

And, what's Gran'pa holding there? Looks like a very interesting muzzleloader, and that barrel-long scope is something else!

Oh, yeah. Don't redesign the trigger. Let them all off each other. They're only Niew Yawk's Foinest (Thugs).

Only kiddin'. I'm a lot taller and way more uglier.

TBTA is not NYPD. Different agencies.

So what's your point?