Yet Another Box O' "Truth" Retort 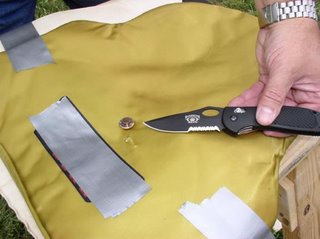 There's not such a thing as beating a dead horse when it comes to self-defense. There IS such a thing as participating in the proliferation of bad ideas that may result in grievous harm, and in answer to certain communications we receive, the following is offered as another stab at explaining the bad work done by others.

I'll backtrack a little first. There are acquaintances of mine who are not capable of viewing this infernal web log, so what I do is cut & paste, then email entries I believe might be of interest. Unfortunately, while a blog with "Shooting" in the title may be banned, one with "Box" is not, and the queries come hot and heavy as to what in the name of all holly hells is going on.

We've spoken about the horrid work being done on the immensely popular Box O' Truth, and someday I do promise to create a similar site, sort of an Anti-Box so as to set the story straight. There are those, such as the proprietor of Box, who believe that rifle's and handguns are mysterious entities separated by an unbridgeable chasm of performance.

"I've said it before.....rifles are rifles and pistols are pistols."

Yes. And ice tends to be cold, water is wet, and the moon is not made of green cheese. Generally speaking, rifle bullets are propelled by larger-capacity cartridge cases. The bigger the case, the more propellant, the more propellant, the faster a bullet will travel. Rifles usually have longer barrels, too, and this allows the full charge of gunpowder to come into play and also helps in kicking up the velocity.

The "problem" with rifle munitions is the fact that virtually all of them came into being as hunting rounds that were tweaked for the military or law enforcement to then see use on human targets. Not the best way to design a life-or-death commodity, but it was most certainly the fastest and easiest. Problems arise when a deer-bullet is used and the target, as the deer, takes it's sweet ass time to expire. Deer run for dozens of yards with unsurvivable wounds and that means chasing after them, but bad guys continue to shoot back and that means they can kill us. No one but a total fool would head to Alaska looking for Brown bear, or to Africa on a Buffalo hunt armed with less gun than necessary, but day after day our military, law enforcement, and run of the mill civilians interested in self-defense are asked to do just that.

"Laws" derived from the Hague Convention prompted NATO to ban expanding bullets except when used on non-uniformed combatants, so modern bullet technology hasn't been employed by the professionals for several decades now. Police are stuck with varmint-rounds, and wannabes employ the same platforms because, well gee willickers, the cops use them so they must be good.

Nothing could be further from the truth. Cops use them because that's all they're allowed to use. Many factors go into the decision making process that results in ammunition purchases for law enforcement, and a PRIMARY concern is not to upset the bleeding hearts who'd run amok if real man-stoppers were used. Mention BLACK TALONS in the presence of a liberal, any liberal will do so you don't have to look really hard, and once they recover from the shock of hearing so monstrous a name spoken allowed where even the CHILDREN might hear, you'll run out of Kleenex in coaxing them down from the roof.

Winchester Black Talons WERE the bees knees way back when, but the name had to be changed to protect the same sort of being that has a peanut-allergy attack whenever a Skippy commercial airs. The upside to it all was that the bullet was vastly improved, and in it's current incarnation as Ranger-T Ammunition is pretty good stuff. Winchester braves the wrath of the Loons discovering that the New-Ranger is deadlier than the Old-Talon, but finds comfort in knowing that such folks understand virtually nothing about everything, and as long as something doesn't LOOK or SOUND evil, then it's good to go.

But abject stupidity is not proprietary to lefties. Otherwise well meaning people can and do generate reams of misleading data that is really stupid stuff, and since we're not talking about tomatoe-plant-fertilizations, such stupidity can be quite harmful.

Check out ANY magazine, or theatrical presentation purporting to portray modern law enforcement officers "clearing" a room, or house. Hunched-over, leaning forward to make their long-barreled weapons "easier" to deploy in a close-quarter environment. Short, choppy steps to enable so halting and clumsy a gait. Then take a peak at the Box O' Truth guy as he shoots his vamint-guns and guess what? Yes. He's attended a modern training school that features such ridiculous tactics, and HE'S shooting in his backyard! Open the arms a little? Un-hunch yourself? Lengthen that stride?

Not a chance. Police use M-16 knockoffs because handguns of similar or better performance are forbidden them. NOTHING with the name "magnum" can be employed for fear of sending the Skippy-Haters into toxic shock, so new tactics were aborn'd to deal with the bad guys. Take a boxing, or martial arts class and the first thing a good instructor will stress is balance. Feet shoulder width apart or better. Learn to dance, find some rhythm, shadowbox in the cellar but in the name of all that's holy DON'T hunch and scrunch. The military STILL sends tunnel-rats into close-quarter environments with properly outfitted handguns, because the right sidearm with the right ammunition is the better choice for those conditions.

And what the Loons don't know can't hurt them. Be sure to refrain from naming something BLACK DEATH FROM GEORGE BUSH'S EVIL PLAN and the world will be none the wiser even if the weapon system can take down a small plane a mile away.

"I've said it before.....rifles are rifles and pistols are pistols."

Nope. Not even close. The right handgun can be deadlier than anything the military or law enforcement is allowed to use, if only science were to participate in the design. Imagine a .460 or .500 S&W type gun with recoil-assistance and ammunition created to stop a large man and not a whitetail.

Attention to detail. Pictured is a spent round that Mr. Flabbybrained retrieved, and he doesn't seem to realize that it is not a Hydro-Shok (sic) as he claimed, but is in fact a Federal EFMJ...Expanding Full Metal Jacket that no one in their right mind would use to test the protection afforded by body armor. He not only shot the wrong type of bullet but posted the wrong picture. Amazing.

And his is one of the most popular firearms-related websites on the net. Can you even begin to imagine what could be done were people to send you free ammunition and even offer guns and rifles to check out? And donate enough money through paypal to keep the website up and running and well in the black?

Regardless; it is what it is, and absent anyone with half a brain we are left to daydreams of what might be. Pay as little attention to this man as is humanly possible. Keep sending the mails and when I get the chance I'll try to look into what he and others just as bad are saying. I know next to nothing about everything too, but I've seen plenty of rounds impact targets and if I'm unfamiliar with a particular subject there's over 100 years experience in the close circle of friends I can call upon to tell the story of what's real versus what someone's trying to sell.
Posted by Fits at 6/16/2006 02:35:00 AM

In five years you couldn't rebuke the box of truth with your own testing but you still slander the site? Everything I've seen on there seems correct as far as they claim it to be. He's just shooting stuff and posting his findings and opinion. It tends to match up with mine as well.