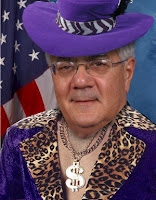 Despite reports from local Massachusetts media, Rep. Barney Frank, Massachusetts Democrat, remains confident he will win his re-election in November against his Republican opponent Sean Bielat. Former President Bill Clinton appeared with Mr. Frank recently at a political rally in Taunton last week, and Mr. Bielat claimed, according to reports, that Mr. Clinton was brought in to help buoy Mr. Frank.
"The notion that it’s a sign of panic is just silly. That’s just politics when they don’t have anything else better to say. It’s a tougher race, because once I became chairman of the [banking] committee in 2007, the right-wing media talk show hosts decided to target me."
Yeah, he's correct you know. Right Wing types tend to disassociate themselves from congress"men" who run gay brothels in their apartments. Don't know if targeting is an appropriate description, however, as even wide-angle sights might not be enough.
Posted by Fits at 9/30/2010 06:46:00 PM