Last Saturday I posted that it was my intent to have a cut-off between a Frost Cutlery import and a knife of my choosing. Sort of.

The original deal was supposed to be me showing off what a decent blade could do, and hoping Frost would retrieve said gauntlet and run with it. But, I then said to myself, that's just not gonna happen. I piss them off, sure, but while being dumbass as dumbass can be, they aren't stupid, so it should be up to me to get my hands on a Frost knife and have a go at it.

Then the fickle finger of fate made a full frontal appearance. I logged into Cutlery Corner, went there looking for a Show Special figuring that I at least should order a product they have enough faith in to promote, but once in, the page, alas, was blank. Still is.

So then I looked around some more. Really wanted to find a Frost Indian Red Bone Special because its hilarious that Frost doesn't know that having Todd Boone say "This here's an authentic American Indian Red Bone..." is both offensive and amazing at the same time, but as is the case a lot with Cutlery Corner, what they're showing you on TV doesn't necessarily jive with whats available online. Stupid is as stupid does.

Then I found the "Red Tag Skeleton Tacs" and all was well. Was always a BIG fan of Red Skelton so perhaps this was kismet. Placed the order then waited.

Next day, no mention of any order to be found. Day after, samey-same. Day after that, nope. Kismet surrendered to bupkiss and I had to face the fact that the order was never processed. No charge to my card, no trace of it on Cutlery Corner. I buy loads of stuff online and never had that happen before, but I guess it was bound to, so I can't really blame the Frosted Flakes because the vagaries of the internet are legendary. 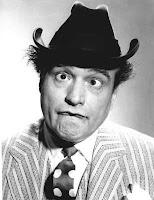 Hmmm. So what would Clem Kadiddlehopper do?

Being fair sucks sometimes. NOT to at least try and be fair, means acting like, like, well like Frost Cutlery, but I tried dammit. Isn't as if learning any more about YouTube is going to make me do backflips; hell the podcast wasn't paid hardly any attention to but I don't DO this gig for attention so why am I bitching anyways. TONS more effort and thinking goes into this stupid web log than anything seen at Cutlery Corner, and a best effort is all I was ever taught to do so, scuzz for a moment while I blow my nose cuz this is making me weep. There.

Okay, so I'll wait a tad longer to see if the order shows up, and no, I'm not going to just up and place it again because I DO NOT trust the machinations of con man James A. Frost. I'll give it a little more time then proceed to proceed. Maybe I'll get my hands on a decent Chinese knife to show how Frost doesn't need to sell crap because some of them Chinamen products aren't half bad....
Posted by Fits at 9/14/2010 04:05:00 PM