Michelle Obama: "Life In The White House Is Hell...I Can't Stand It!" 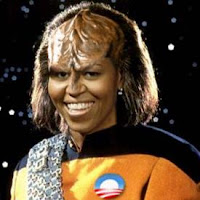 U.S. first lady Michelle Obama reportedly finds life in the White House barely sufferable.
"Don't ask! It's hell. I can't stand it!" Michelle Obama is said to have told French first lady Carla Bruni during a private conversation at the White House during an official visit by French President Nicolas Sarkozy last March.
That's some of the the dish served by Bruni, in her new tell-all book. In "Carla and the Ambitious," which the U.K. Daily Mail newspaper reviewed for Thursday editions, Bruni quotes the first lady's lament, among many other revealing episodes with global leaders and French paparazzi.
Isn't she just so special?
I do believe that the last first lady to object to White House Living was Mary Todd Lincoln, but she had a legitimate beef.
What bothers Shelly so much is all of this transparency nonsense; having to be held accountable for being a wretched Klingon  human being and all that jazz.
It's okay though, darlin'. Come 2013 you and Barry will be back to fleecing the murder capitol of America or some other dirty place so just hold on baby.
Posted by Fits at 9/16/2010 01:17:00 PM