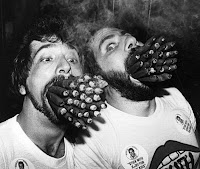 Reds owner Bob Castellini passed out cigars to players and coaches amongst the champagne showers inside the clubhouse at the Great American Ballpark after seeing his team earn its first postseason berth in 15 years.
Five people watching the celebration on television reportedly called the statewide smoking ban complaint hotline. The complaints were sent to the health department, leading to a letter landing on Castellini's desk notifying him of the pending investigation.
Cincinnati Health Department spokesperson Rocky Merz said while no fines are issued for any initial violation, someone from the department will enter the stadium unannounced to look for anyone smoking in the facility."
As we all know, the biggest difference between liberals and Conservatives is thus: If a Conservative doesn't particularly like something, he doesn't do it. If a liberal doesn't like something, he rushes to have the government ban it.
We've gone way too far down the rabbithole to undo all of the damage to personal liberties inflicted upon "pragmatic" Americans who strove mightily to just get along with the Suzy-Perfects of the country.
Not a damn thing we can do to prevent them from multiplying, and yeah, its all but impossible to listen to all of that whining and not feel the urge to simply give in. But there are also times when enough is enough.
Time to draw that line in the sand and grow some backbone. Ohio is Ohio, but Ohioan panty twisting doesn't have to spread to the free parts of the nation.
Posted by Fits at 9/30/2010 11:10:00 PM

I have a suggestion to help with Ohio's increasing budget woes. How come there isn't a budget idea hotline?

I think there IS a budget hotline number, TJP; it's unlisted though and only Barney Frank has it.