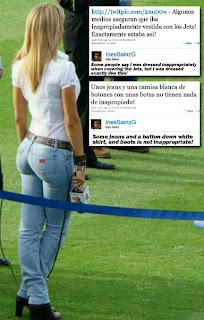 Nah; Ines disrespected herself first. Didn't mean those nasty, evil men had to let their hormones do the talking, but she was at the Jets-Ravens game for one reason and one reason only...

To make news. Any kind of news would do as long as someone was watching and could be counted so as to draw advertising revenues to the place that sent her there.  All over the country, sports editors and copy boys and reporters are looking for work because their old jobs laid them off. Newspapers and TV are, you may have heard, losing viewership faster than anyone would have imagined, and lots of them are being replaced by the Ines Sainz of the world.

Why? Duh. They draw attention better than sports editors and copy boys and reporters do. Miz Sainz declares herself to be the "sexiest sports reporter in the world", so she knows this too. We all use what the good lord gave us, but not all of us do so then complain when successful.

Male reporters aren't allowed anywhere near the locker rooms of female athletes. I agree with that. Men and women, I've come to discover, are different, and women sports stars don't want to shower with some guy with a microphone sharing the stall. Believe it or not, lots of men don't want women reporters bugging them after a game either, but that's just tough luck pally.

Bottom line is that there are plenty of double-standards in the world and sometimes they work for you, other times not so much. Thing that pisses me off about this story in particular, is that some of the Jet players, as well as members of management, COULD have acted a tiny bit more mature. Is that an ass you could bounce a quarter off of? Sure is, but act like maybe just maybe you've seen one before.
Posted by Fits at 9/14/2010 03:01:00 PM

Damn... opportunity missed. I have photos of this bimbo parked in my "Babes For The Blog" folder, and if I'd have posted them before this I woulda had an avalanche of new web traffic. C'est la vie.

Thanks for stopping by pardner.