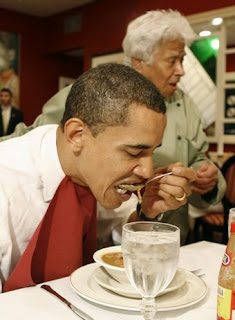 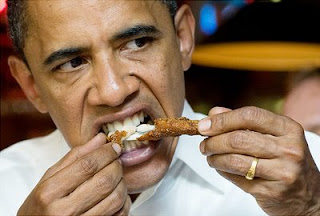 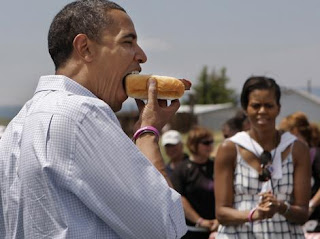 In scanning the outpouring of articles about Michelle Obama's latest attack on America's eating habits...don't eat fats...don't use salt...don't get a gigantically fat ass like she has... I couldn't help but notice the sad shape her husband is in.

There are literally hundreds of pictures of Barry chowing down to beat the band and it was a minor puzzlement as to why he dined as if every meal would be his last. Then it hit me.

The guy is, as we all know, henpecked to the nines and since Fat Lady First Lady Michelle is forever fighting an obesity problem it is obvious that she takes it out on him and keeps the man virtually skeletal.

I mean, look at the guy. Skinny as a rail and you'd think that anyone who could slam back the chow like he does would be pleasingly plump. Or, at the very least, his clothes wouldn't hang on him like there was nothing underneath them.

Look, Barry, its like this pally. I absolutely hate your guts but man to man, this is some shit you've stepped in and the time has come to act like a male of the species and frickin EAT whatever you want, when you want to. Maybe you wouldn't be able to bow so low to the next Arab that wanders on by, but screw them anyway. Michelle doesn't like it then screw her too. Ah hell, no, don't do that. Like I said, I hate your guts but screwing Michelle isn't something I'd wish on any man.

And not for nothing, but did anyone ever teach this guy how to eat like a, well, semi-civilized person? Starvation would be the only reason for such abominable table manners, okay. Plus...get a load of the look on Lady Shelly's kisser as Barry Boy attempts to inhale that hot dog.
Posted by Fits at 9/15/2010 03:04:00 AM

HATE THEM IF YOU CAN'T SLAVE THEM IS YOUR MENTALLY HERE. FOR EIGHT YEARS YOU HAD A IMBICILE RUNNING THE COUNTRY AND YOU NEVER GOT ANGRY. GO AND INVESTIGATE 9/11 AND SHUT UP.

Since your comment was unintelligible, I've used an online translation service to try and decipher what in all hells you were trying to say. Here goes:

"I AM A LEFTWING DOUCHEBAG WHO CAN ONLY USE CAPS BECAUSE I'VE ABSOLUTELY NOTHING OF INTEREST TO SAY AND HOW ELSE COULD I GET PEOPLE TO LOOK AT MY PATHETIC CRY FOR RECOGNITION!!!? INSTEAD OF REPLYING TO ANY ACCUSATIONS REGARDING KING BARRY'S INEPTITUDE, I'LL JUST BLAME BUSH!!!!"

Thanks for playing. And oh, by the way; you lose.