More On: The Witch Called "Murkowski" 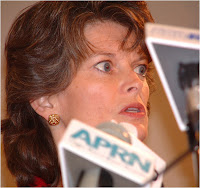 Joe Miller tells National Review Online that Sen. Lisa Murkowski, a member of the “ruling class,” is “refusing to relinquish power.”
Miller, Alaska’s GOP Senate nominee, defeated Murkowski in an August primary. In a press conference tonight in Anchorage, Murkowski announced her plans to continue in the race as a write-in candidate. Miller says that he has “been told directly” by senior GOP senators that Murkowski will now “lose her seniority and her committee positions.”
Miller says Murkowski’s move “should shock anyone with integrity,” calling it another example of how her “lifeblood is power.” She has, he says, a “disconnection from reality.”
“[Murkowski] is going back on her word,” Miller continues. “She gave her word several days before the primary that she would respect the primary outcome.”
“This is a write-in campaign for a person named Lisa Murkowski,” Miller says. “We are not terribly concerned about it. It doesn’t change our approach. Our calculus is that we win. It is now Joe Miller versus the liberals.”
Miller agrees with Sarah Palin, who earlier tonight in Iowa predicted that Murkowski’s effort will be “futile.” “It will end in failure,” Miller says. “She is going to throw a lot of money away just to mud sling.”
UPDATE:
Sen. John Cornyn of Texas, NRSC chair, reacts:

“Republican primary voters spoke when they nominated Joe Miller in Alaska, and I am deeply disappointed in Senator Lisa Murkowski’s decision to ignore that clear message and wage a write-in candidacy. The NRSC stands firmly behind Joe Miller’s nomination, and we will ensure that he has all of the resources that he needs in order to win this November.”

Initially I held off speaking my mind about The Wicked Witch of the Northwest because although I strongly believed her to be as addicted to power as many others did, maybe, just maybe the realization of what the Tea-Party movement is all about finally struck home with her.

I sincerely hope that Cornyn and McConnell are correct in their belief that Murkowski can do no harm.
Posted by Fits at 9/18/2010 01:23:00 PM

Lisa Murkowski’s no Crist, lest anybody think that-

He is at least a talented campaigner/politician/snake who’s actually got his name on the ballot- and started his independent candidacy with a big lead, NONE of which are the case with Murkowski

Now Joe Miller can whip two libs instead of one, as Palin said about Murkowski’s decision yesterday "It’s all good".

Even Orange Charlie is getting creamed by double digits in the latest poll, so far Rubio had no problem facing two boneheads that support the Obama agenda AT ALL

You're probably correct in that analysis. Raises my blood pressure whenever the power elite won't take no for an answer.