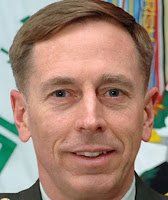 BOGOTA, Colombia (Sept. 6) -- Edward Nino Hernandez is in many ways a typical 24-year-old Colombian male. He loves to dance reggaeton, dreams of owning a car - preferably a Mercedes- and wants to see the world.

Top on his list of people he would like to meet are Jackie Chan, Sylvester Stallone and former Colombian President Alvaro Uribe.

What sets Nino (pronounced NEE-nyoh) apart is his size.
He is slightly taller than a piece of carry-on luggage and weighs just 22 pounds (10 kilograms).

Nino has just been officially certified as the world's shortest living man by Guinness World Records, measuring 27 inches (70 centimeters).
Posted by Fits at 9/07/2010 02:34:00 AM

Didn't realize Petraeus was so short! ;)

And getting shorter by the minute. Obama found his "YES, MASTER" man at long last.