Obama And His Lackeys: Building A Mosque at Ground Zero Is Fine...Just Don't Burn The Koran And Be So Insensitive 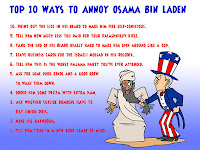 "There have been more terrorist attacks on U.S. soil by these allegedly calmed Muslims in Obama's first 18 months in office than in the six years under Bush after he invaded Iraq"
I sort of knew Ann Coulter was going to comment upon the Florida Koran burning deal, as soon as General Midget Petraeus made his stupid remark about how incensed moslems were going to be if we went and burned all their pornography. He's in Afghanistan killing them, but that's okay.


In response to Gen David Petraeus' denunciation of Florida pastor Terry Jones' right to engage in a symbolic protest of the 9/11 attacks by burning copies of the Quran this Sept. 11, President Obama said: "Let me be clear: As a citizen, and as president, I believe that members of the Dove World Outreach Center have the same right to freedom of speech and religion as anyone else in this country."

Gov. Charlie Crist of Florida lauded Obama's remarks, saying America is "a place where you're supposed to be able to practice your religion without the government telling you you can't."

New York City Mayor Michael Bloomberg called Obama's words a "clarion defense of the freedom of religion" -- and also claimed that he had recently run into a filthy jihadist who actually supported the Quran-burning!

Keith Olbermann read the poem "First they came ..." on air in defense of the Quran-burners, nearly bringing himself to tears at his own profundity.

No wait, my mistake. This is what liberals said about the ground zero mosque only five minutes ago when they were posing as First Amendment absolutists. Suddenly, they've developed amnesia when it comes to the free-speech right to burn a Quran.

Weirdly, conservatives who opposed building the mosque at ground zero are also against the Quran burning. (Except in my case. It turns out I'm for it, but mostly because burning Qurans will contribute to global warming.)

Liberals couldn't care less about the First Amendment. To the contrary, censoring speech and religion is the left's specialty! (Any religion other than Islam.)

They promote speech codes, hate crimes, free speech zones (known as "America" off college campuses), and go around the country yanking every reference to God from the public square via endless lawsuits by the ACLU.

Whenever you see a liberal choking up over our precious constitutional rights, you can be sure we're talking about the rights of Muslims at ground zero, "God Hates Fags" funeral protesters, strippers, The New York Times publishing classified documents, pornographers, child molesters, murderers, traitors, saboteurs, terrorists, flag-burners (but not Quran-burners!) or women living on National Endowment of the Arts grants by stuffing yams into their orifices on stage.
Gen. Petraeus objected to the Quran-burning protest on the grounds that it could be used by radical jihadists to recruit Muslims to attack Americans.

This is what liberals say whenever we do anything displeasing to the enemy -- invade Iraq, hold captured terrorists in Guantanamo, interrogate captured jihadists or publish Muhammad cartoons. Is there a website somewhere listing everything that encourages terrorist recruiting?
...If the general's main objective is to hamper jihadist recruiting, may I respectfully suggest unconditional surrender?
But wait -- weren't we assured by Fire Island's head of national security, Andrew Sullivan, that if America elected a "brown-skinned man whose father was an African, who grew up in Indonesia and Hawaii, who attended a majority-Muslim school as a boy," the terrorists would look like a bunch of lunkheads and be unable to recruit?

It didn't work out that way. There have been more terrorist attacks on U.S. soil by these allegedly calmed Muslims in Obama's first 18 months in office than in the six years under Bush after he invaded Iraq.

Also, as I recall, there was no Guantanamo, no Afghanistan war and no Iraq war on Sept. 10, 2001. And yet, somehow, Osama bin Ladin had no trouble recruiting back then. Can we retire the "it will help them recruit" argument yet?

General Midget Petraeus believes that burning a koran is more hateful to a moslem than carpet bombing one of their towns where children have been slaughtered from the collateral damage. We all know that that isn't true. The reason they hate us for burning a koran is because it reminds them that the koran says they are supposed to kill us because we aren't moslems, and here they are dancing around in the streets throwing shoes around at one another rather than traveling to America and blowing up more buildings.

It's just gotta be a bitch being a lunatic and reminded that you should be out lunaticing instead of playing that old moslem game of smell-my-footwear, and buggering little boys.

But the absolute #1 reason for burning a koran?

Pissing off Barack Obama. In other words, the two moslems we despise the most.

Oh and before I forget; you've all heard of the true story about our special forces literally having Osama bin Laden in their sights, but Bill Clinton refusing to give the go-ahead to off the sucker.

Bill didn't want to piss off any moslems.