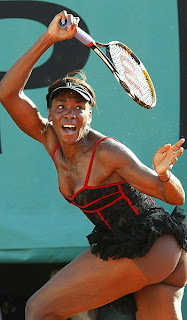 The U.S. Open. Flushing Meadows, NYC. Back when I still had an apartment in the Apple I'd appreciate this time of year and wouldn't miss putting in a day or two at the Open. Going back as far as I can remember, there were always plenty of seats available at the women's games, and that was the single most important reason their prize money was a lot less. They drew a lot less. But those were before the days of entitlements galore, and nowadays they earn almost as much as the men who pack the place morning day and night. Sell more concession stand food and trinkets, too.

The picture to your left...if you're tuning in from Rio Linda that's probably the side with the hand you don't eat with...is of Venus Williams, one of the preeminent females on today's circuit. Saw her play as well; would get to the stadium around 10:30 or so to catch the first morning game at 11:00, and ask for the cheapest seats available. Come match time when the television camera's would be rolling, the ushers would invite folks from the nosebleed sections to move on down and fill the most visible seats up. So it isn't as if I'm coming clean that I actually paid big bucks to see her or her sister. Found out that sometimes, the nearer you are the more uncomfortable it can be for an up close and personal with some of the gals grunting and shouting and screaming and cussing on the courts, if you get my drift.

Just have to maintain an acutely disciplined state of mind and continue telling yourself to "watch the ball...watch the ball". I don't think genuine blindness can occur from actually staring at one of them, but I didn't get to be this old by taking dumbass risks. I happen to remember this one time where there was an unoccupied seat in the third row, super close, and me and this fellow got into a heated argument about it. We finally decided to flip a coin, I lost, so I had to sit there. Wasn't pretty.

Still and all, I do enjoy tennis, and am looking forward to the major matches ahead. From the safety of my comfy living room. Why take chances. Especially after seeing some of what they're wearing this year.
Posted by Fits at 9/02/2010 08:33:00 AM