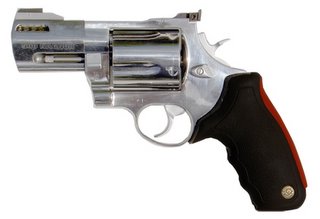 So a man I have confidence in tells me that he's handled one of the early Taurus .500 magnums, the snubby one, and says it fits like a glove. Be that as it may, the Not So Secret Society Of Stupid Carry Weaponeers has all but decided that it shall be our concealed handgun of choice, and to hell with how it feels, the thing is damned awesome. I shall await the upcoming field reports from the brethren before acquiring one, and it may be a long wait as Taurus isn't the speediest of manufacturers but that suits me okay for now. It's a WANT thing, not a NEED thing, and don't ask why someone would tote around 5 pounds or so of iron because I'm the wrong person to respond intelligently to such a query.

Not that long ago, the better half was commenting upon an article of clothing I had just purchased, asking all of the gal things. Does it feel nice next to my skin, is it comfortable, is it warm, stuff like that. She was going on and on and walking all around me like they do when sizing up something you may have thrown on that looks positively terrible, but she was nodding as she was asking so I let out a breath and said, well, it fits.

It fits. Her eyebrows came together from my reply, and she said, well, okay, but does it...repeat all of the above.

And I hadn't a clue. It was at that point in time I received the ephiphany that I never once considered how something felt, or aside from shoes, thought of the comfort level of anything I'd don. Spend a chunk of your life wearing funny looking clothes and hauling around tons of gear, and it'll do it to you every time.

So when someone asks if my carry rig is comfy, or least when they first would so inquire, I stop to think and say, well, yeah, it's okay. The absolute worse person to ask if a holster is any good, or a gun is too heavy, or if something generates too much recoil. I know what happens when the shit hits the fan and the adrenaline cranks out, and my reponse has always been a decent one so I am unconcerned about things that might bother the uninitiated. The last thing I should have to worry about it how I will act, and practice something long enough in the real world and see what I mean.