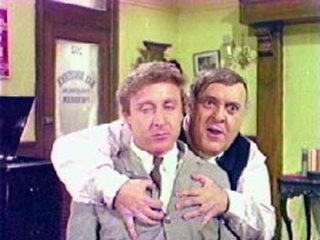 But would it KILL these assholes to summarize something? ANYthing? What's that you say, then how would they feature the detweillers who wanna be stars? Good point. And think of the investors...those little old ladies writing check after check and wanting a bang for their buck...

Jason Leopold on MSNBC's The Raw Story put out the word that additional evidence being given to a Grand Jury could lead to an indictment of Karl Rove, and National Review Online delved into the flying rumors. But Protein Wisdom was dubious, firedoglake poured water on the rumors and Decision '08 dismissed the underlying tale as a weak case. Meanwhile, David Corn analyzes the latest from columnist Bob Novak, reported by the Raleigh News & Observer and wonders if it means "there's another reporter here, sitting on important information," while JustOneMinute gets deep into the meaning of "forgot" as it applies to the parties in the Plame investigation -- and adds some "Bonus Speculation."

NINE, count 'em, NINE links. About a rumor. Just imagine how much you'd have to wade through if the ragheads bomb NY again.