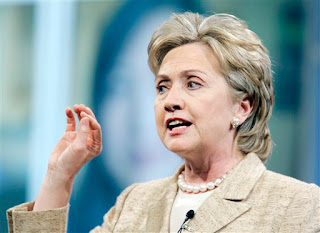 DES MOINES, Iowa (AP) - "Democratic presidential hopeful Hillary Rodham Clinton on Monday dismissed any comparison between the firing last fall of eight U.S. attorneys with the replacement of 93 U.S. attorneys when her husband became president in 1993.

"That's a traditional prerogative of an incoming president," Clinton said in an interview with The Associated Press.

Once U.S. attorneys are confirmed, they should be given broad latitude to enforce the law as they see fit, she said.

"I think one of the hallmarks of our democracy is we have a devotion to the rule of law," Clinton said.

She conceded that should she win the presidency in 2008, she likely would replace all of the U.S. attorneys appointed by President Bush. She said that's merely following traditions in which presidents appoint prosecutors of their own party.

Clinton argued that the Bush administration's firing of the eight federal prosecutors has caused an uproar because it is seen as a conservative push to shift the balance of power in favor of the executive branch.

Democrats have accused the Justice Department and the White House of purging the prosecutors for political reasons. The Bush administration maintains the firings were not improper because U.S. attorneys are political appointees.

On another topic, Clinton said the Senate is struggling to find a way to deal with an Iraq funding measure. A House-passed measure includes a timetable for pulling troops out of Iraq, but Clinton said there's no consensus in the Senate.

"We don't have the votes to pass anything," she said.

Clinton spoke after events earlier in the day in Des Moines. She held a forum, broadcast on ABC's "Good Morning America," focused on health care issues and she collected the endorsement of former Iowa Gov. Tom Vilsack.

At the forum, Clinton said she "learned a lot" during the failed health care effort of her husband's presidency.

"We're going to have universal health care when I'm president—there's no doubt about that. We're going to get it done," the New York senator and front-runner for the 2008 nomination said...."

First off, she agrees that a President may fire a political appointee, but feels it's only okay when DEMOCRATS do it?

And she promises Universal Health Care. Not enough votes to do jack, but magically she'll find a way to spend hundreds of billions of our dollars to care for those who refuse to work for a living.

Simply amazing. Worst part about it, is the fact that we KNOW Hillary will make ludicrous statements that contradict one another, but there are actually a great many people who find it impossible to see through her con.

Sweet mother of pearl but I so desperately want someone well versed in the art of the debate to take this creature on and make mincemeat of her.

Pictured: Without realizing the cameras were rolling, Mrs. Bill Clinton describes the size of her husbands most valued asset.