The Only Ones With Bad Enough Aim 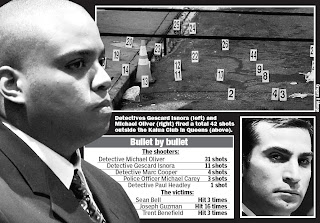 March 26, 2007 -- "The undercover detective whose shots ignited the 50-bullet barrage that killed Sean Bell was indicted on two manslaughter raps, even though none of his ammo hit anyone, The Post has learned.

The disclosure that NYPD Detective Gescard Isnora's 11 bullets apparently missed their mark means the victims - Bell, Joseph Guzman and Trent Benefield - were hit only by Detective Michael Oliver's shots, according to the indictments and sources close to the case.

Oliver, who, like Isnora, was charged with two counts of manslaughter, already faces the legal hurdle of explaining why he reloaded his gun, firing a total of 31 times during the perceived life-and-death shooting.

Ballistics linking Oliver to all three victims could be another burden for him at trial - although cops are instructed to fire until they believe a threat has ended.

Bell and Benefield were each hit three times. Guzman was hit 16 times. "Five or six bullets" remain in his body, said his lawyer, Sanford Rubenstein.

The fact that Isnora's shots seemingly hit nothing but air raises questions about the legal gymnastics employed by the grand jury that indicted him, Oliver and Detective Marc Cooper but allowed two others to go free..."

So then. The black cop fires 11 times, misses all 11, and is indicted. Two other cops who also fired are not indicted, perhaps because their misses were closer? To be indicted for manslaughter, when you didn't score once and others who also fired weren't charged at all, is passing strange.

As an aside, how the man could have cranked off 11 rounds at bad breath distance and not hit anything is proof positive that he should have had a desk job to begin with.