Markie Continues To Draw Flies...Strike That... A Crowd...

Back in January when we asked how it was that Markie was able to play sniper and fiddle fart with real weapons, no one paid the slightest bit of attention, so it's pleasing to see David continue to hammer away via The War On Guns. 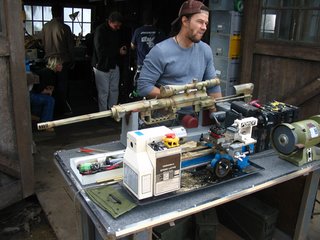 Markie Mark on set. He's a convicted felon. The rifle is genuine.

Tune in to Codrea's War on Guns for the skinny, as it has to do with the Wayne Fincher story.

And by the way:

"I believe Charlton Heston is America's best villain because he loves guns so much. Maybe he should get the award for being president of the National Rifle Association."--Mark Wahlberg, MTV Movie Awards

From Today's War on Guns:

"You have to endure a stupid commercial first, but here's a video where Pokey Poke says he got sniper training for his new movie Shooter" at Front Sight--he says he hit a target 2,000 yards away and that he's "a good shot."