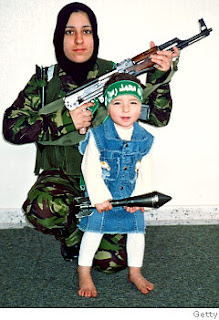 "It was always my wish to turn my body into deadly shrapnel against the Zionists and to knock on the doors of heaven with the skulls of Zionists," Al-Riyashi said in her farewell video. "God gave me two children and I loved them so much. Only God knew how much I loved them."

In the dramatized music video, an actress playing Duha sings as her mother dons her explosives.

"Mommy, what are you carrying in your arms instead of me?" she sings. "A toy or a present for me?"

Later, the young girl sees a TV report of the bombing and realizes her mother is dead. She cries for her, begging for her to come back and tuck her - and her brother, Muhammed - into bed.

"Instead of me you carried a bomb in your hands. Only now, I know what was more precious than us. May your steps be blessed," she sings.

Ken Jacobson of the Anti-Defamation League said militant Hamas has aired videos glorifying suicide bombers in the past, but this was a new low.

"If ever there was a wakeup call to reject any connection to this terrorist group, it would be viewing this horrific piece," he said.

Nadia Rasheed, a spokeswoman for the Palestinian mission to the United Nations, did not return a call for comment."

Reem, the mom in the picture, was of course the first female Hamas homicide bomber. The latest bit of news from the cult of the sandflea, has them making music videos to attract young girls to become bombers.

So exactly when are we going to just kill them all and be done with this idiocy?