When You Simply MUST Use That 12 Gauge For Self Defense 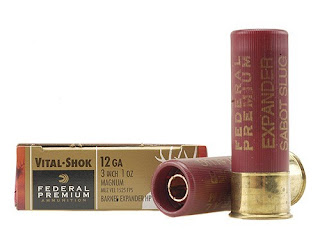 Here we feature mostly handguns as self-defense weapons, catering primarily to the concealed carry crowd. I've spoken about employing a 20 gauge as a home defense shotgun, but let's face it, 12 gauge is king so I placed a call in to my old reloading pal Crazy Jay and asked him what he feeds his Mossberg.

The Barnes Expander Hollowpoint begins life as a .65 caliber, 438 grain (1 ounce) sabot slug cranking at 1525 fps, and can expand to over 1.3" when shot through water jugs. Federal claims 2" groups at 100 yards when fired from a rifled shotgun barrel, and Jay informs me that a smooth bore is accurate enough for bad breath distances up to 50', but he can't shoot for shit so who knows what "accurate" really means in this instance.

Another candidate for sluggers, is the Remington Buckhammer, featuring a 604 grain slug that scoots free at 1500 fps, and for kinetic energy freaks that equals 3232 ft/lbs, but the Crazed one says it really lives up to its name and hammers "the shit out'cha shoulder."

I do not own a Mossberg 500 myself, one that I'm not tweaking into a pistol-grip type grab-it-and-blow-the mo-fo-away home defense firearm, but if I did, I'd be checking out the Federal Vital-Shok expanders, and on a slow day might have a look at the Buckhammer as well.

And for buckshot devotees, I can speak with some degree of familiarity in recommending #4 shot, but modern tests have determined that #1 shot seems to be the best to employ when wishing to drill that minority thug full of 10, .30 caliber holes, as opposed to the 20 or so (up to 25 actually in the 1 5/8 ounce variations) #4's at .24 caliber. I happened to use #4 shot with great effectiveness, but am always willing to try new and fun things.
Posted by Fits at 3/20/2007 10:09:00 PM