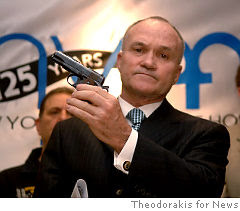 "A uniformed cop was shot in the ankle by an apologetic drug suspect in Brooklyn last night, police sources said.

Officer Rory Mangra, 27, suffered a broken fibula when the bullet struck his lower right leg about 7:30 p.m. at the corner of Dean St. and Flatbush Ave. in Park Slope, police said.

Mangra, a former Marine and Iraq war vet, and his partner, Eric Merizelde, 26, were in uniform and driving an unmarked car when they spotted the suspect smoking marijuana outside a Dean St. beauty parlor, officials said.

Mangra stepped out of the car to approach Newland, but the suspect fled, police said. Merizelde sped ahead in the car, hopped a sidewalk and tried to block the suspect's path.

Newland dived across the hood of the car in a bid to escape, but Mangra snatched him. That's when Newland allegedly grabbed a .22-caliber semiautomatic pistol from the small of his back, Police Commissioner Raymond Kelly said.

A struggle ensued, and the suspect fired once, Kelly said, and then the gun jammed, perhaps preventing further bloodshed.

Mayor Bloomberg once again pushed to get illegal guns off the streets.

"We just have to get guns out of the hands of people with long criminal records," he said at the hospital. "Here we are again, another night, another hospital, another member of New York's Finest shot with what appears to be an illegal gun."

And here we are again, some schmuck smoking grass getting jumped by another poor schmuck following orders. The silver lining is the fact that the cop was shot by a cheap mousegun. and in 2007 just what in all hells is a "broken fibula"? Bevel fractures are common in large caliber firearms, oft times impacting bone with enough force to create secondary missiles from bone particulate itself, yet metaphyseal and diaphyseal fracture patterns differ greatly, with projectile trauma to the diaphyses in cadaver specimens differing from dry bone specimens in that there can be numerous fractures surrounding the exit with little or no fragmentation around the exit in dry bone. This is usually referred to as the "drill hole" effect, with shaft impacts of both dry and cadaver specimens comminuted with "butterfly" fragments produced bilaterally.

More than likely, the small .22 (Long Rifle I would imagine) caliber bullet did just that, as it impacted with something akin to the drill hole phenomena, and we wish the officer well in his recovery.

Now get real and decriminalize these recreational drugs that are causing untold crime and suffering throughout the country.

Pictured: NY Police Commissioner Kelly, putting on his most disgusted face as holds the icky semi-auto for all to ooh and ahh over. Gee Commish, but aren't you glad it wasn't a real gun and the lucky cop gets off with a boo-boo?