The Only Ones Valet Enough 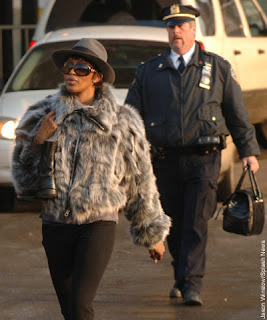 March 21, 2007 -- "Runway diva Naomi Campbell yesterday deputized one of New York's Strongest to be her personal valet, making the gun-toting sanitation cop carry her bag like a paid flunky.

The fashion princess' stunning display of entitlement came on Day 2 of her five-day sentence of community service at Department of Sanitation offices at Pier 36.

Campbell, paying her debt to society for a cellphone throwing assault on her maid, emerged from a black Cadillac Escalade and was met by a Department of Sanitation cop and another official.

A Campbell bodyguard popped out and tried to give her handbag to the sanitation official, who refused and pushed the leather tote back into the hired muscle's beefy paws.

Then the bodyguard handed it off to the next closest person - sanitation police Lt. John Fitzgerald - who took it and dutifully walked five steps behind Campbell as she strutted for cameras..."

Not only didn't he search the bag, but officer 3-chins may very well have asked which designer label it was, as he does appear quite fetching with it and may wish to acquire one of his own.