Witness The Poor Workman As He Blames The Tools 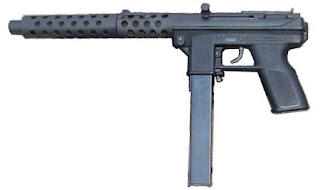 "During the spring of his sophomore year in high school here, Jeffrey Johnson took the standardized tests that Florida requires for promotion and graduation. He scored in the 93rd percentile in reading and the 95th in math. That same semester, he earned straight A’s.

For Paul Moore, who had taught Jeffrey in an advanced social studies class at Miami Carol City Senior High School, a terrible question began to emerge. It all turned on the concept on accountability. Jeffrey had proved accountable to the state by passing the Florida Comprehensive Assessment Test. But what about the accountability the state had to keep Jeffrey alive?

Jeffrey was the third Carol City student shot to death during the 2005-6 academic year. By the first semester of this year, two more had been killed in gun violence. It was then that Mr. Moore decided to do something more than deliver eulogies, visit weeping parents and initiate class discussions about all the senseless death.

He drafted a petition, expressing his righteous anger. (“Anger” indeed was the word, for it derives from the Norse “angr,” which means grief at the wrongness in the world.) The petition appealed to the newly elected governor, Charlie Crist, to “make Florida’s schools and the communities around them ‘measurably’ safer” and it concluded, “You are accountable to us for it!”

In the past month, several thousand people have signed the petition. It is not being forwarded, in the modern way, on the Internet. Instead, volunteers take paper versions into classes, churches, offices; a copy even turned up among some teachers in Chicago. Mr. Moore’s words have reached to the heart of something.

Jeffrey Johnson was shot with a Tec-9 semiautomatic, a weapon that it had been illegal to manufacture for a decade under the federal assault-weapons ban. Congress let the ban expire in September 2004. For its part, Florida has no state restriction on the sale or possession of such arms and is unlikely to pass one.

It was one of the first states in the nation to adopt a law allowing individuals to carry concealed handguns, and two years ago it enacted what is known as the “Stand Your Ground” law, permitting a person to preemptively “use deadly force” against any perceived threat of attack."

Yes. This is from the NY Times. Blaming a crappy gun that happens to look really cool, and therefore HAD to be an assault weapon. The weepy family asking Florida to be held accountable because a criminal used a gun to kill their son.

Don't dare blame the criminal. Don't ask why such scumdogs are allowed to break the law again and again.

Blame Florida for allowing its citizens to defend themselves. And the dumbest thing, well, one of the dumbest because this IS a Times article, is the fact that neither poor Jeffrey nor his sniffling Dad had the manliness to own a firearm and protect themselves.

What a concept, eh? Taking charge of your own life and liberty and family. Far better to ask for entitlements, isn't it? To point the finger at a gun so badly made that the manufacturer went out of business long before the Assault Weapon Ban went the way of the Dodo. It wasn't bad because it did anything particularly evil, mind you. It was bad because it was heavy and clunky and not enough folks found it to shoot straight enough to bother with.

And damn if I don't wish that I didn't sell the one I had because it didn't do anything particularly well EXCEPT piss off liberals, and for that alone it deserves a place in any grown mans gun cabinet.