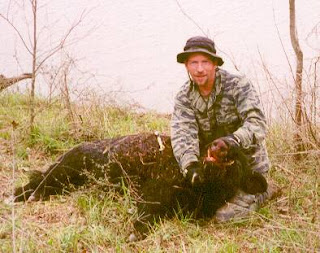 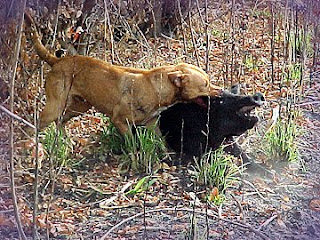 Hog hunting is popular and easy. People like to eat hogs. They like to hunt them. Ranchers don't like hogs because they are destructive. When a hog is hungry, it roots around in the soil and destroys crops. For this reasons farmers don't like them. Ranchers care more about the fact that the hog makes big holes and wallers in the mud. No one likes that.

Do I Have Hogs on my Land?

When a hog has been on your land you'll know it by the waller spots, which are hog sign. Shooting hog is easily done at night with spotlights. Hogs can be baited with corn.

Hogs are trapped as well. People like to trap them because it's easy. Building a hog trap is easy enough, you'll just need to know how to weld. Or not know how, but be willing to learn.

The above is from a Hog Hunting blog, as I've been toying with the idea of going on an old fashioned Hogtrap. Its cool living in an area where guys are named Eugene and Elmer and Elbert, and the Slaughter brothers*, because you know damned well they are southerners born and raised and once a friend always a friend. Seems like to get the best Hog hunting I'd have to go south a bit, but the Slaughter brothers tell me that old Gatlin Mates has some land where there's always a plethora of feral boar, so I might sharpen my skills there before heading where the really big hogs live.

I'm not really all that keen on using a handgun like some folks I know, not that I wouldn't bring along a sidearm but since I've not a hog-fighting dog to my name it'd be best to go with a suitable long gun. And I'm certainly no great white hunter either, but like any other man** when hungry I'll kill something then eat it.

Hog hunting is legal year-round, and no license is required, but the Slaughter brothers tell me if'n I see a decent sized turkey it would be wise to get a license, and at $12.50 it certainly seems like a good idea. Elmer has an 8-bore and says that slugs from it will drop a hog like Grant took Richmond, but I think I'll stick with either a decent 12 gauge, a Remington 700 in ought-six, or both, depending upon how far we'd be traveling afoot.

Anyway, I'll be keeping you abreast of my learning to hog hunt, because as far as I'm concerned, the only good hog is a dead hog.

*When I asked how many Slaughter brothers there were, the answer was 27, but not all of them are brothers to one another but cousins and brothers, and a gal or two that gets called a Slaughter brother for reasons still to be determined.

**Man; an adult male person, as distinguished from a boy, a girl, or a woman, and certainly never a Hog.

PICTURED: A Well trained dog taking down a south Florida hog. They tell me that its best to try and anchor one with a well place shot then let the dog finish it off. Most dogs, they say, really enjoy sinking their teeth into a nice fat hog then dragging it down for the pack mates to join in and rip the beast to pieces. When I asked how bad one must hate a Hog to do that, Elmer said that the dogs need fun, too.

Oh and yeah I almost forgot. Crazy Jay says he'd lend me his 450 Marlin, but its Hog and not Cape Buffalo we'll be after so I think I'll pass.

Last but certainly not least, if any of you have some suggestions or a good old fashioned Hog hunting story then by all means lets hear it.

UPDATE: To add a pic of a dude who took a 400 pounder with nothing but a knife. It's getting more and more popular. You sneak up on the Hog and jump it. Stabbing away like a mo-fo. Thats why I can't bring too big a gun. Real men use knives, sissy's bring bows, and fairy powder puffs a handgun.